As you're likely aware, being able to send data securely over a network (especially a public network) is of growing importance. To that end, many web applicates employ the use of SSL certificates to encrypt traffic between a client (often your web browser) and a server (someone's http server).

I really recommend watching that portion of that video. Seriously.

Using SSL in Your Application 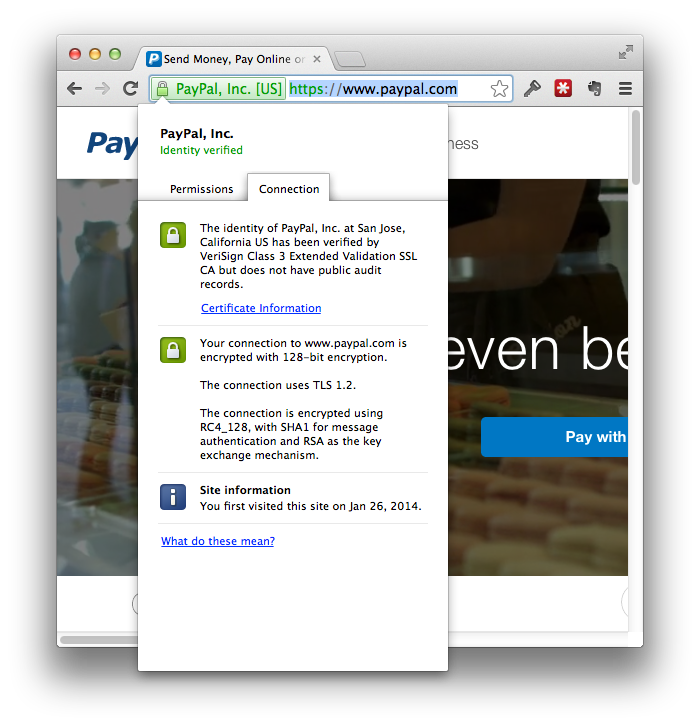 SSL certificates affect your application. When a site is visited under an SSL, browsers expect all resources (images, javascript, css and other static assets) to also be downloaded under an SSL certificate. Otherwise browsers either don't load the assets or show scary warning messages to your users. This means you need to be able to serve your assets and any third party assets with an SSL, including any not directly on your web server (images in your CDN of choice, for example).

That means you want to have a way to test your applications with an SSL certificate in development, instead of waiting for your site to launch to find out there are issues.

Unless there are some extenuating circumstances, you shouldn't need to buy an SSL certificate for use in development. Instead, you can create a "self-signed" certificate, which will work in your local computer. Your browsers will initially give you a warning for using an un-trusted certificate, but you can click passed that and test our your web application with your own SSL certificate.

The basic steps are this:

To start, first make sure you have OpenSSL installed. Most flavors of Linux have this "out of the box", but you should be able to easily install it if not:

Next, we need a place to put our certificates. I usually put them in the same configuration directories as the web server I want to use the certificate with. For example, we can make a directory in the Apache or Nginx /etc directories:

At the time of this edition being released, there happens to be a nasty OpenSSL vulnerability called The Heartbleed Bug. OpenSSL 1.0.1 through 1.0.1f (inclusive) are vulnerable. This means 1.0.1g and greater are fixed. You should see if any of your servers need updating. You can use this site and this site to test if your site is vulnerable.

Once that's done, we can begin creating our certificate. First, we need a private key:

Then we can generate the Certificate Signing Request. This uses the Private Key generated before:

This will ask you a series of question. Here are the questions along with what I happen to fill in:

I left some blank. You can skip Organizational Unit Name and Email Address for a self-signed certificate. I also choose to leave the "optional company name" field blank. Finally, I elected NOT to add in a challenge password. This is something used by the certificate authority (if you're purchasing a certificate) in the case you need to regenerate an certificate.

So, we now have example.key and example.csr files created. Let's finish this up by creating the self-signed certificate.

Here's what we did:

I use the xip.io service so that I can avoid editing my hosts file when I use local development servers. It's useful to automate the process of creating a self-signed wildcard xip.io certificate for my local servers. Let's create a wildcard subdomain. I'll also show you how to do it in a way that can be automated, eliminated the need for human interaction.

The above script follows all of our previous steps, except it does some fancy bash scripting so we can automate passing in the CSR generating variables using the -subj flag and some string parsing.

Once that's saved, you can run script with the following command:

Then you can see those generated files in /etc/ssl/xip.io/.

Now that we've generated some certificates, let's see how to use them in our favorite web servers.

The first thing to do on Apache is to make sure you have mod_ssl enabled. On Debian/Ubuntu, you can do this via:

Next, we need to modify our virtualhost to accept https traffic on port 443.

Usually we create a virtualhost to listen on port 80, a default http port. That might look like this:

And that's it! Once you have that in place and enabled, you can reload Apache's config (sudo service apache2 reload) and try it out!

If you are using a self-signed certificate, you'll still need to click through the browser warning saying the Certificate is not trusted.

After that's setup, you can reload your Apache config (Debian/Ubuntu: sudo service apache2 reload) and test it out!

Here we can see the SSL certificate working, but of course our browser doesn't trust it since it's not certified by a trusted third party. That's fine tho, we can still test our application's use of SSL. 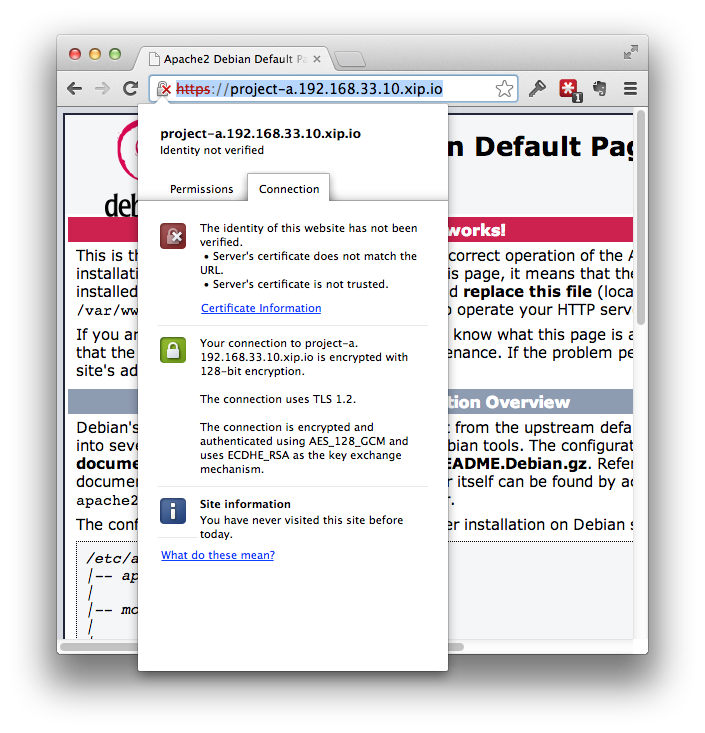 "Server's certificate does not match the URL." - And here we thought we made a wildcard certificate! Well, it turns out that matching wildcards isn't supported the same across implementations/browsers, especially "sub-sub-domains" we use with xip.io. Read here for some more information.

For Nginx, we typically have a server "block" listening on port 80 (a default port for http). This will look something like this:

For setting up an SSL, we want to listen on port 443 (a default port for https) instead:

These server blocks can be in the same configuration file or in separate ones. That's completely up to you. Just remember to symlink any configuration files to the /etc/nginx/sites-enabled directory if they need to be enabled.

To setup the https server block with our SSL certificate, we just need to add a few lines:

And that's it! Once you have that in place and enabled, you can reload ngin (sudo service nginx reload) and try it out!

If you are using a self-signed certificate, you'll still need to click through the browser warning saying the Certificate is not trusted.

Similar to the Apache setup, for using xip.io you can adjust the server_name and certificate paths and be on your way:

As per the Nginx Admin Guide, you can usually define both http and http in one server block:

If you want to see a more complete Nginx server block, check out the Third Edition, Nginx Instead.

One-liner for generating an self-signed certificate:

This will ask you for the same options as about to generate the CSR. Some explanation:

You can see the process of automating the creation an SSL certificate (no user input needed) in this shell script in the Vaprobash project.

Use curl with a self-signed certificate:

Use wget with a self-signed certificate: