When we first get our hands on a fresh server, some initial security precautions are always warranted, especially if the server is open to a public network. The servers we get on a lot of our popular providers (Digital Ocean, Linode, Rackspace, AWS and so on) are usually open to the public - they are assigned an IP address on their public network upon creation.

Many hosting/server providers start you off with password-based access to the root user (or occasionally a sudo user who doesn't need a password to run commands as root, similar to Vagrant). The root user can do anything to our system, and so we want to lock down the ability for remote connections to log in as root.

So, if we want to remove the ability to remotely access our server as user "root", we need another user to connect with. This user also needs the ability run privileged commands.

We'll do the following to lock down remote access to our server:

That will stop user "root" from remotely logging in and allow our new user to log in. This new user will need a password to run any privileged commands.

Then we'll take this one step further - we'll stop users from being able to login with a password altogether, using SSH keys instead. We'll do the following:

Alright, let's get started. First, you'll need to log into the server with the credentials your provider gave you. For most, that's something like this:

AWS might require you to use a downloaded identity file (Ubuntu users might be given user "ubuntu" instead of "root"):

For the majority of this article, I'm assuming you're logged in as root, and thus don't need to use "sudo" to run the following commands.

Once you're in, you an create a new user:

This will ask you for some information, the most important of which is the password. Take the time to add a somewhat lengthy, secure password.

Don't confuse the adduser command with the useradd command. Using adduser takes care of some work that we'd have to do manually otherwise. You can leave the other questions empty or add in their information (full name, room number, and other somewhat useless information).

Next, we need to make this new user (someusername) a sudo user. This means allowing the user to use "sudo", to run commands as root. How you do this changes per operating system. On Ubuntu, you can simply add the user to the "sudo" group. (If you need a refresher on what groups are, see the past edition Permissions and User Management).

Let's go over that command quickly:

That's it! Now, on non-Ubuntu systems (RedHat, CentOS), you may need to do some extra work to do the same.

The process is written up nicely here, but is essentially just running the command visudo and appending the following to the "# User privilege specification" section (Fair warning - It uses Vim as an editor!):

Now that we have a new, privileged user, we want to stop user "root" from remotely logging in.

To do this, we need to edit the /etc/ssh/sshd_config file.

Once inside that file, find the PermitRootLogin option, and set it to "no":

You may also want to change the default SSH port (22) used. This is because a lot of automated systems scan port 22 to see if its an open for attack. You're allowed to use ports between 1025 and 65536. To do so, you can simply change the Port option:

If you want to get even more secure, you can explicitly define a list of users who are allowed to login. That's with the AllowUsers option:

Once you save and edit from the /etc/ssh/sshd_config file, we need to reload the SSH daemon.

That's it! Before you close your session as user root, I suggest you now open a new terminal window (session) and attempt to log in with your new user:

You should beA prompted for a password - enter the one you created and you should be logged in! Try running some commands as "sudo" to ensure it works.

Assuming that's working, we can take this a step further by disallowing users to log in with a password. This means users can only log in with a valid SSH key. This is more secure as it's substantially less likely for a user to get their hands on your SSH private key than it is for them to obtain or guess a password.

On your local computer, the one from which you log into your server (for me, that's my Macbook), run the following command to generate a new SSH key pair (a private and public key):

This will ask your for a password. You can either leave this blank (for passwordless access) or enter in a password. I highly suggest using a password - making it so attackers require both your private key AND your SSH password to gain SSH access, in addition to your user's password to run any sudo command on the server! That's three hard things an attacker would need to get in order to do real damage to your server.

Note that the SSH password you create is NOT the user password used to run sudo commands on the server.

Once that's copied, you can go into your server as your new user ("someusername" in our example).

Note that we'll use "sudo" now, since we're logging in as our new, non-root user.

Once the authorized_keys file is saved, you should be able to login using your key. You shouldn't need to do anything more, it should attempt your keys first and, finding one, log in using it. You'll need to enter in your password created while generating your SSH key, if you elected to use a password.

Note: You may need to set some permissions of your .ssh directory and authorized_keys file.

On my Mac, I create a long SSH password and then save the password to my keychain, so I don't have to worry about remembering it. When you log into a server and you have an SSH key setup, your Mac should popup asking for your key's password. You'll have the opportunity to save your password to the Keychain then.

If you're on a Macintosh, remember to click "Remember password in my keychain" so you don't have to type in your SSH password more than once: 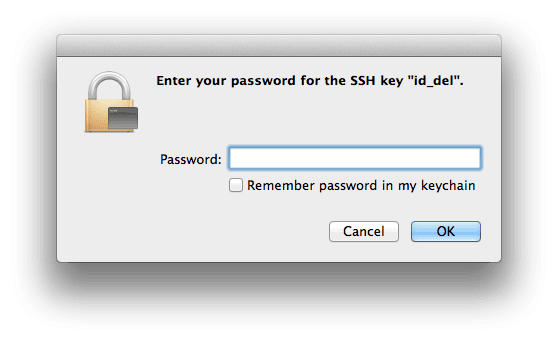 The last thing we'll do is to tell our server to only allow remote access via SSH keys (by turning off the ability to log in using a password).

Once inside, find or create the option PasswordAuthentication and set it to "no":

Save that file, and once again reload the SSH daemon:

You should test that you can still log in after this change before exiting out of the server.

And that's it! We've done some basic user security. We've closed off the root user from logging in, create a sudo user, and turned off password authentication. Now in order to log in via SSH, an attacker would need to gain your SSH private key, your SSH password, and then still know your user password to run damaging commands on your server (although there's definitely potential for damage even if an attacker doesn't know the user's password to run sudo commands).

Here are some more resources on similar and adjacent topics you may be interested in:

If you're a PHP developer, also check out the eBook Building Secure PHP Apps by Ben Edmunds.