Docker is a Container.

To put it in an over-simplified way, if I run a CoreOS host server and have a guest Docker Container based off of Ubuntu, the Docker Container contains the parts that make Ubuntu different from CoreOS.

This is one of my favorite images which describes the difference: 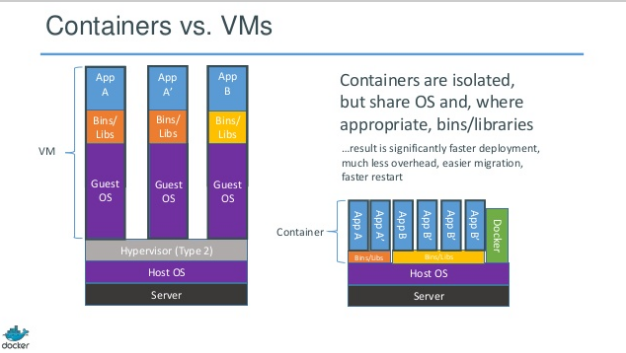 This image is found on these slides provided by Docker.

Docker isn't compatible with Macintosh's kernel unless you install boot2docker. I avoid that and use CoreOS in Vagrant, which comes with Docker installed.

I highly recommend CoreOS as a host machine for your play-time with Docker. They are building a lot of awesome tooling around Docker.

My Vagrantfile for CoreOS is as follows:

If you have VMWare instead of Virtualbox:

If you're not using CoreOS, then check out this page with install instructions for other flavors of Linux. Note: Ubuntu is what Docker develops on, so that's a safe bet.

If you are using CoreOS, dont be dismayed when it tries to restart on you. It's a "feature", done during auto-updates. You may, however, need to run vagrant reload to restart the server so Vagrant set up file sync and networking again.

This is the unfortunate baby-step which everyone needs to take to first get their feet wet with Docker. This won't show what makes Docker powerful, but it does illustrate some important points.

Docker has a concept of "base containers", which you use to build off of. After you make changes to a base container, you can save those change and commit them. You can even push your boxes up to index.docker.io.

One of Docker's most basic images is just called "Ubuntu". Let's run an operation on it.

If the image is not already downloaded in your system, it will download it first from the "Ubuntu repository". Note the use of similar terminology to version control systems such as Git.

So, we can see that docker did run /bin/bash, but there wasn't any running process to keep it alive. A Docker container only stays alive as long as there is an active process being run in it.

Keep that in mind for later. Let's see how we can run Bash and poke around the Container. This time run:

You'll see you are now logged in as user "root" and can poke around the container!

Exit out of that shell (ctrl+d or type exit) and run docker ps -a again. You'll see some more output similar to before:

We can see that just by logging into bash, we created a .bash_history file, a /dev directory and a /dev/kmsg file. Minor changes, but tracked changes never the less! Docker tracks any changes we make to a container. In fact, Docker allows us make changes to an image, commit those changes, and then push those changes out somehwere. This is the basis of how we can deploy with Docker.

Let's install some base items into this Ubuntu install and save it as our own base image.

There were, of course, lots of new files added. Let's save this version of our base image so we can use it later. We'll commit these changes, name this image and tag it in one go. We'll use: docker commit <Container ID> <Name>:<Tag>

You'll notice a ton of Ubuntu's here. Since I first used the Ubuntu base image, it loaded knowledge of the variously tagged versions of Ubuntu they have available on the Docker index.

More excitingly, however, is that we also have our own image fideloper/docker-example and its tag 0.1!

Building a Server with Dockerfile

Let's move onto building a static web server with a Dockerfile. The Dockerfile provides a set of instructions for Docker to run on a container. This lets us automate installing items - we could have used a Dockerfile to install git, curl, wget and everything else we installed above.

Create a new directory and cd into it. Because we're installing Nginx, let's create a default configuration file that we'll use for it.

That's about as basic as it gets for Nginx.

Next, create a file named Dockerfile and add the following, changing the FROM section as suitable for whatever you named your image:

Once that's saved, we can build a new image from this Dockerfile!

If that works, you'll see Successfully built 88ff0cf87aba (your new container ID will be different).

Check out what you have now, run docker images:

What you can see here is that for each line in the Dockerfile, a new container (and commit sha) is produced if that line results in a change to the image used. Similar(ish) to version control! (Also, how funny is the name "backstabbing_turing"?)

Let's run this web server! Use docker run -p 80:80 -d nginx-example (assuming you also named yours "nginx-example" when building it).

The -p 80:80 binds the Container's port 80 to the guest machines, so if we curl localhost or go to the server's IP address in our browser, we'll see the results of Nginx processing requests on port 80 in the container.

Well, we're sorta there. Nginx is working (woot!) but we're getting a 500 error. That's likely because there's no default index.html file for Nginx to fall back onto. Let's stop this docker instance via docker stop <container id>:

To fix this, let's share a directory in between the Container and our host machine. First, create an index.html page from where we'll share it.

Then we can start our Docker container again:

...or better yet, point your browser to your server's IP address! 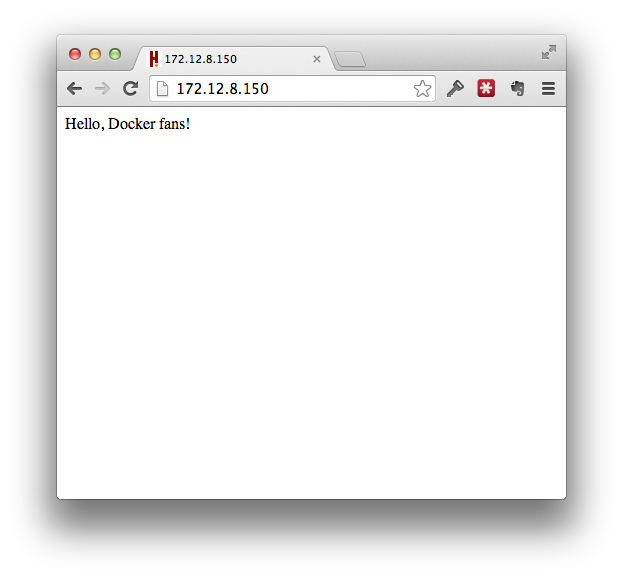 Not fully covered here (for now) is the ability to link two or more containers together. This is handy if containers need to communicate with eachother. For example, if your application container needs to communiate with a database container. Linking lets you have some infrastrcture be separate from your application.

Start a container and name it something useful (in this case, mysql, via the -name parameter):

Start your web application container and link it to that container via -d name:db (where db is an arbitrary name used in the container's environment variables):

Here's an example of a MySQL Dockerfile

So, we fairly easily can build servers, add in our application code, and then ship our working applications off to a server. Everything in the environment is under your control.

In this way, we can actually ship the entire environment instead of just code.

If you're like me and make tons of mistakes and don't want the record of all your broken images and containers lying around, you can clean them them:

Note: You must remove all containers using an image before deleting the image

I always use Phusian's Ubuntu base image. It installs/enables a lot of items you may not think of, such as the CRON daemon, logrotate, ssh-server (you want to be able to ssh into your server, right?) and other important items. Read the Readme file of that project to learn more.

Especially note Phusion's use of an "insecure" SSH key to get you started with the ability to SSH into your container and play around, while it runs another process such as Nginx.

Orchard, creators of Fig, also have a ton of great images to use to learn from. Also, Fig looks like a really nice way to handle Docker images for development environments.